A week in review and other things too

Training:
*  This week has been a weird week.  I'm kind of in limbo with my training.  I finished my 1/2 marathon on Sunday and don't officially start my HIM training till Monday.  So, I've just been chillin' and relaxing and doing things when I can fit them in.  I didn't get stressed out if I didn't get to ride my bike, run, or swim b/c I know soon enough I won't have this luxury.


*Here's a picture from my race.  I don't think it's too bad, which surprises me because I never get good race pictures.

*  My legs were still kind of sore on Monday from my 1/2, so I decided to do some easy spinning on my bike.  Once again, I set up my trainer outside while my youngest napped and my oldest played in the yard.  I only got in 30 minutes, but it was great and my legs felt so much better afterwards.


*  I got to go to another yoga class on Thursday.  I got called out half way through by a kids' club staff member because my son had an "accident."  I thought about grabbing my stuff and just leaving, but changed my mind because I really wanted to finish the class.  I quickly went to change him, then got back on my mat.  I'm glad I decided to stay because it ended up being a really good class.


* I've been so focused on doing the drills that my swim coach told me to do that I haven't swam continuously in a long time.  So, for one of my swim workouts I decided to just swim.  I wanted to make sure that I could still do it.  I did a 300m wu, stretched, and then just swam.  It was awesome and it felt so good.  I was originally only going to do 1500m, but I was feeling good so I kept going and ended up doing 2000m.  I was able to get into a groove and I felt smooth in the water.  I love that feeling!


* I can't wait to see how I do in the open water.  The place I go to for OWS opens May 1st and I'm really excited about it.  Besides figuring out my stroke, I also have to figure out how to get past the mental part of being in open water.  For some reason, I tend to freak out, panic, and revert to swimming breast stroke every once in awhile to calm myself down.  I know that if I just swam and focused on swimming I would be fine, but I just can't seem to get over it.  I know everyone says it takes practice, but I've been doing tris for over 4 years and it's the same thing every year.  Ughhh...I just wish I could get past whatever it is that goes on in my mind!  Hopefully, this is the year!

Life:
*  Blog giveaways rock!  I won a cool tiki mug and some bora bora bars from Kelly at My Life as a Trimommy and they are really yummy!  And, I love how they have all natural ingredients.  I just happened to be at Costco the other day and they had a box of 18bars...woohoo!  One thing about Costco, you always end up buying more than what you planned. 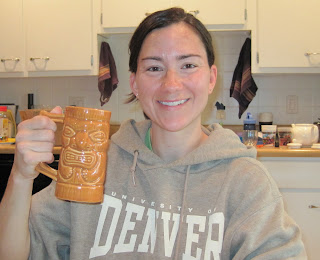 Here I am drinking my soy chai tea in my new tiki mug after my swim.  I didn't realize my hair was parted so weird until after I looked at the picture..ha ha.  Please excuse the dirty dishes in the background.  I didn't get around to getting them done last night.  And, the sweatshirt I'm wearing is one that I actually won in a 5k race.  It is the only race that I won anything from.  Of course, it was like 10 degrees out so there weren't a lot of people there, but still, it was nice to win something and get a warm, comfy sweatshirt as a prize! :)

*  Remember how I was frustrated about potty training my youngest?  Well, besides his little "accident" on Thursday, I am happy to say that he's been wearing big boy undies all week and has been doing great! Woohoo!  I think  the reason he had the accident at kids' club is because he didn't feel comfortable telling the staff he needed to go.  Poor little guy.

*  My youngest sister ran in her first 1/2 marathon this past weekend and she did great!  She did have to stop around mile 12 to throw-up (maybe Big Daddy could give her the pukie award through me...ha ha), but she kept on keepin' on and finished in an awesome time!  I am so proud of her!  I can't wait to run the Denver Rock-n-Roll marathon with her in October...it will be the first marathon for both of us.  We're also doing the Muddy Buddy in Phx. in November.  That should be a lot of fun!

* This should probably go under training, but oh well.  After 5 years, I had to buy a new watch.   I use it for swimming and running when I don't feel like wearing my Garmin.  And, since I'm not a "girly-girl," I actually wear it as my every day watch too.  This has been, by far, the best watch I have ever owned.  It can really take a beating, and isn't very expensive considering how long it lasts.   Here is a picture of my old one.  Notice the left side coming undone.  The top section came undone about a week ago.  My husband super glued it, but when the bottom broke too, I figured it was time for a new one.  Plus, it was getting foggy after my swims, which it has never done before.   Bye bye watch. 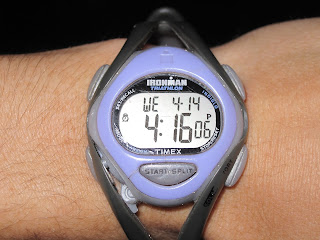 Here's a picture of my  new one:  I love the new color and the yellow indiglo light button!  At least the yellow button will be one thing that matches my new shoes! Ha ha. 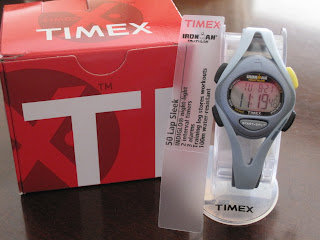 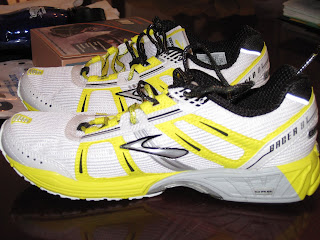 I hope you all have a great weekend! :)

Go ahead and enjoy your recovery week, the volume will be there starting Monday.

Are you starting on day 1 or starting in Build phase?

I love the your race pic! You look great!

I love yoga and I need to get back to going. That will have my ITB issue.

Congrats with the potty training!

And good job with your continuous swim! Where do you do your OWS?

Congrats to your sister!

I love the new watch and shoes!

I'm the same way in open water!!!! Except for the breast stroke part, I hate it hahha. But I definitely go into the water before the race start to get my anxiety out, and then feel ok for the actual race. And.... too funny about the watch, because I have the pink one, and it's totally separating at the bottom too! Have a great weekend!

BDD-I'm actually starting from day 1, but I'm changing the running part a little bit b/c I'm already up to a 1/2mary distance.

Christi-I do my OWS at Grant Ranch. It's an awesome place to swim and we have access to the locker rooms and showers. But, they're doing some work on the lake so we don't know how long we'll be able to swim there. I've also gone to Gravel Pond in Chatfield, but I don't really like it. I'm going to look into doing some the swim things at the Aurora Res. We'll see. Where do you do your OWS??

I love my timex! but they always get thrashed after ~4 mo's. the band. Exactly what's happened to yours. hmm...timex has gotta know it's an issue eh?

oh, and i hear you on the 'lull' week btwn coming off a race b4 starting your training for the HIM. That's how I was the week after Lavaman.

Looking forward to hearing about your training;-)

That is a good picture of a race! I always hate the way I look while racing...my girls told me to just stage a picture...but I told them it would be obvious if I was the only one running!

I am a timex girl...love the garmin, sometimes....totally prefer the timex! It has been with me for 16 years now! (not the same one, but a timex all the same) I wore it to prom and my sisters wedding...got grief both times...but it is just ME! Oh well!

Love your recovery workout--a 30-minute spin is my favorite the day after a race! Sounds like you did everything right this week to get yourself back in the saddle and ready to hit it hard again.

Hi Aimee,
You are so funny...I think that your picture turned out great! You should see some of the race pictures that I have where I am looking like the biggest Homer:)

I laughed at your comment about winning one race and getting that cool sweatshirt:) I have had a few of those small races where there is no real competition and I look like a rock star:) The only time I will ever look like a rock star!! God bless the little races!! Hey, have a wonderful weekend Aimee:)

Aimee,
Lots of great things going on! Good lookin race pic...I remember getting called to the child center for "accidents"...it wasnt that long ago, you are getting there!
- Derek

That is very nice race pic!

Love the tiki mug ... my wife would go crazy over that!

The new brooks kicks are pretty cool looking ...what version are they?

Love your race pic! Sounds like 30 minutes on the trainer was just what you needed! :)

Jeff- my shoes are the Brooks Racer ST 4. I've done pretty much all of my training in them and raced my 1/2 mary in them too. They are great! I had last years model, but I really like the yellow color for this year! :)

the race pic is great! I know what you mean though, I hate 90% of mine! you have an adorable family!! enjoy this week of transition and low stress, the heavy training will come again!
love your mommy stories and great recipes!!

I have the same watch, but I need to get a tiki mug

Hey Aimee! I usually OWS at Prospect Lake in Colorado Springs but due to budget cuts that is not going to happen this year. I have to find some new areas and it looks like I will have to come up your way!

I am so with you on the OWS thing. It kind of concerns me. It is the one thing that holds me back a little and I am a lousy breast stroker, so that is out. ha! I'll get some OWS in before the HIM, but still....

I am dieing to do the Muddy Buddy! Trying to talk my friend into it. I'm wearing her down.

I love my Times Ironman. I have a slightly different model, but it is great on swims and running, also when I am not wearing the Garmin.

A lot of runners swear by an easy bike session to help the legs recover when they're doing back-to-back races, so there's something to be said for it. I really need to get a trainer.

And our OWS starts June 1. I've never done it in a supported setting, so I'm eager to get started - I'm a panicky freak trying to swim in OWS! 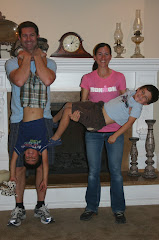 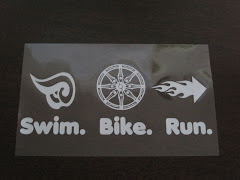 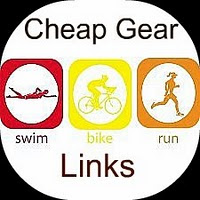